Dreamforce 2015 is long gone, but as we begin talking about where we’ll stay during #DF16 and planning out buying passes, there are a few shocking (great) things from #DF15 that I just can’t let go of yet…

While waiting in line at the Dev Zone in Moscone a sound stood out above the crowd that made you (or at least it did to me!) just have to stop and listen up- DJ Cavem rapping about sustainability. A surprising thing to hear above all the coding and app talk, but a welcome change to say the least!

Taking over an entire cruise ship for a week, though temporary, is no small feat. The amount of planning and organization to make the Dreamboat possible is incredible. If you didn’t check it out last year, make that a must on your Dreamforce 2016 to-dos. Even a quick visit for happy hour will leave you stunned with the no-detail-too-small atmosphere they created. 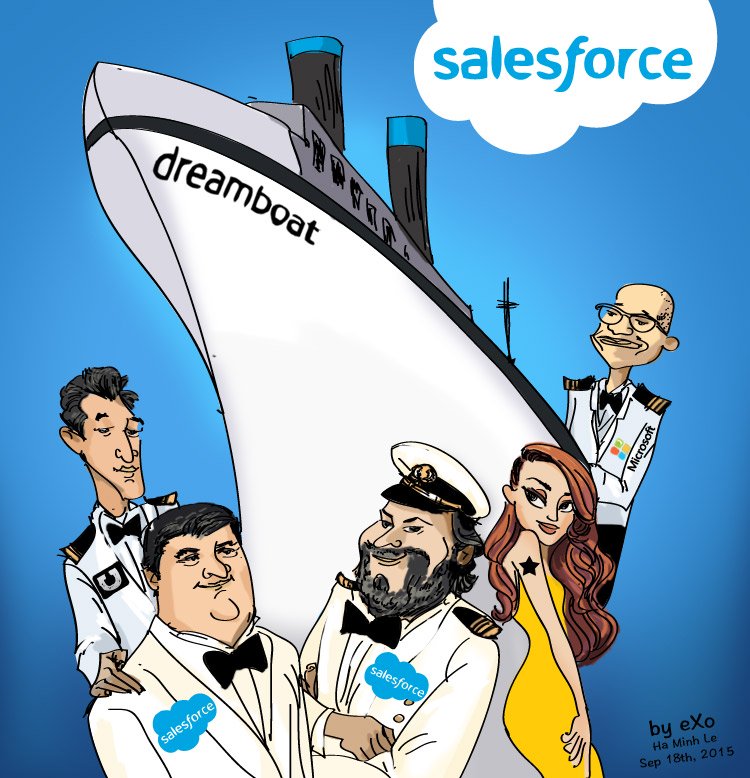 I’ve tried Periscope and I have failed. In fact I even recently uninstalled the app because I was tired of friends inviting me to watch some blogger bake something. It’s probably delicious, but I don’t have time for that during the work day… With that said- I ALWAYS made time for the #RoadToDF15 Periscoping. Someone behind the scenes would record around the studio as they setup and practiced lines right before going live. It was a great use of the app by a business and I loved hearing the more canny jokes they made before the real cameras began rolling. I will definitely reinstall my Periscope app in time for #RoadToDF16!

If the need for the cruise ship as a floating hotel didn’t already clue you in, Dreamforce is HUGE. 150,000 people attended Dreamforce 2015. Although not all of those people have full passes, attending the breakout sessions and keynotes, it’s still unfathomably big. I can tell you that it’s the Biggest Software Conference in the world and that entire traffic patterns in San Francisco are adjusted for it, but somehow you still won’t be ready for it. Or at least I wasn’t.

I’m sure I’ll face Dreamforce 2016 head on, armed with the same maps, directions, and perfectly laid out schedule as I did last year, but the biggest challenge will always be there- getting past the shock of how many people there are! Of course, I should make a small note here to say that despite the insane number of people, I hardly ever waited in line and everything was built to handle the masses. Dreamforce may be huge, but they can handle it!

The very idea of a Women’s Leadership Summit at a conference like this definitely shocked me. Marc Benioff admitting that Salesforce needs more women in leadership roles is a big deal. I believe it’s important that we acknowledge and show thanks for it. Of course I’m excited to see what results will come from their new initiatives, but even just admitting it out loud is a great step in the right direction.

As a woman in technology who currently has the privilege of working in a truly open and diverse atmosphere and as someone who has also had great women mentors my whole life (high five mom), ‘women in leadership’ is something I think about often. Being a smaller company (Cloud on Tap), we have the benefit of really building this organization up as a place where both men and women can thrive. However I know from my own and others’ experience that this is much more of a battle in larger organizations.

It’s not to say that the men on top are wrong to be there. No way! But it’s great to see the acknowledgment that women are under represented in leadership positions and that’s something to keep in mind as we plan for the future.

“We’re going to try to be the change we are seeking. We’re going to be an example of great women’s leadership in our industry.” – Marc Benioff

In no particular order, these 5 things from #DF15 still have me shocked, amazed, and very excited for #DF16. Is it October yet?

Alison McConoughey is a Sr. Project Implementation Coordinator and Team Lead at Cloud on Tap. She has a special place in her heart for marketing automation, Charleston, and the oxford comma.

Stay up to date on Pardot and Salesforce by subscribing to our blog!